WELCOME TO CHESTER
​ ​The Vermont you've been hoping to find.

The Chester Historic Preservation Committee (CHPC), formed on November 10, 2016, is a nine-member advisory committee which provides advice and support to the Town of Chester to preserve and renovate Chester’s public historic structures and resources for their appropriate time period and uses.  CHPC sources expert historical and architectural assessments to prioritize repairs and maintenance and to increase public access.  By improving displays and stimulating interest and support, CHPC capitalizes on the valuable assets and important landmarks of Chester’s cultural, artistic, historic, and architectural heritage.  CHPC works with public and private entities to coordinate improvements and to pursue financial assistance for Chester’s historic preservation projects and programs. For further information, please contact CHPC Chair Lillian Willis at lbwillisct@comcast.net or 802-875-1340.
Chester’s Historic Public Buildings
The Town of Chester owns seven historic public buildings as shown below. 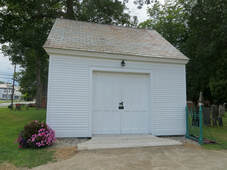 Hearse House.  Built 1830 and located at 184 Main Street, opposite the Town Green and adjacent to the Brookside Cemetery.  The simple, one-story, wooden structure is 18.5’ wide x 19.5’ deep and has a slate roof.  It was altered in 1907 to its present configuration and then rehabilitated and transformed by Chester Townscape, with financial assistance from the Town and private citizens, into the Hearse Museum.  Opened to the public on October 28, 2017, the unique museum features the Town’s handsome house-drawn hearse, associated photographs, and information about death and funeral customs.   The museum is open for self-guided tours daily in dry weather from Memorial Day through Columbus Day. 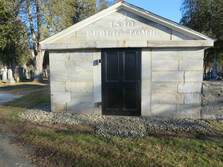 Public Tomb.  Built 1850 and located on Main Street, adjacent to the Hearse Museum and Brookside Cemetery.  The small, one-story 10’ x 12’ granite building, with a slate roof, was used throughout its history, and then until around the beginning of 2018 by the local funeral home, to hold those who died during the winter but had to wait until spring to be buried.  The building was repaired and re-pointed in 2015 as a Chester Townscape project with financial help from the Town of Chester. 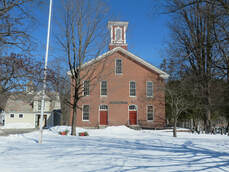 Old Central High School (aka Academy Building).  Located at 230 Main Street, adjacent to the Brookside Cemetery and Hearse Museum.  Built 1881 near the site of the 1814 Academy Building, which was demolished to make room for the high school, the 2 ½-story brick-and-granite structure has a slate roof and was built in the Italianate Revival style.  It is the present home of the Chester Historical Society.  Its roof and windows were repaired around 2018. 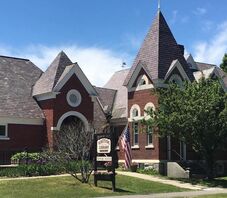 Whiting Library.  Built 1891-92, with a new wing added in 1995, the building is located at 117 Main Street near the Village Green.  The 1 ½-story brick-and-granite structure blends Romanesque and Queen Anne features and has a slate roof. 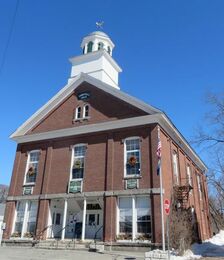 Town Hall.  Built 1884 and located at 556 Elm Street at the junction of Elm with Route 103/Depot Street.  The two and a half story, gable-front, three-bay, red  brick building with a central recessed entrance that is flanked by two classical steel columns has triple-hung windows, a wood cupola above a trussed attic space, and a classical cornice that wraps its slate roof.  Stone entrance steps ground the solid structure. 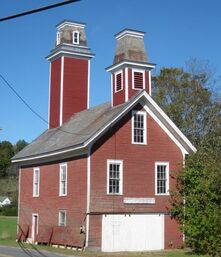 Fire District No. 2 (aka Yosemite Firehouse).  Built c. 1870 at 792 Depot Street on Route 103 between Town Hall and the Stone Village, and positioned adjacent to the Williams River.  The slate-roofed,
​2 ½-story wooden building was built in late 19th-Century Vernacular Second Empire Style with mansard roof towers.  The more southern tower is the bell tower.  The taller, northern one is the hose tower, where canvas hoses were hung inside to dry.   On April 17, 2018, courts declared the Town of Chester to be the owner.  Later that year the decision was made to renovate the building and transform it into a fire museum – perhaps the only one in the nation to have two towers.  The unheated building presently houses various fire equipment and vehicles, including a 1931 American LaFrance fire engine and a 1849 Hunneman Hand Pumper.

​Jeffrey Barn.  Built 1889 and located at 251 VT Route 103 North, west of the Stone Village and adjacent to the Town’s well field.  The immense 44’ x 84’, sawn-wood, 3-story cow barn and its unusual hollow-brick silo fell into disrepair.  The barn’s large size, need for structural repair, limited parking, and position close to Route 103 and the Town’s well field restrict realistic potential uses, which are essential if the Town is to consider funding repairs.
​Present Planned Projects for 2022 by CHPC and the Town of Chester